by The Jerry Granelli Trio 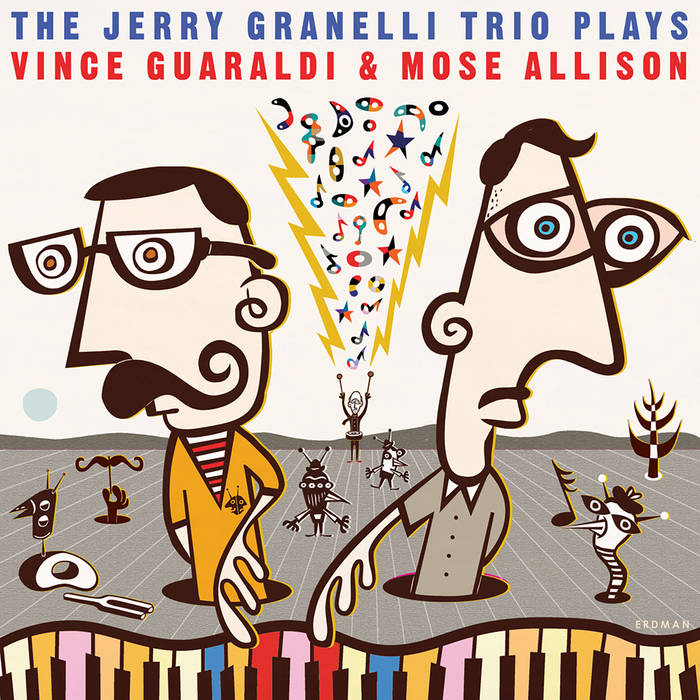 Over the course of a career spanning six decades, drummer Jerry Granelli has worked with many of the greatest artists across the full spectrum of jazz and beyond. On The Jerry Granelli Trio Plays Vince and Mose, his rapturous new album for RareNoise, Granelli revisits two of his most indelible collaborations from the vantage point of the exploratory now.

The Jerry Granelli Trio Plays Vince and Mose starts from the foundation of two singular composers: the elegant, lyrical pieces of pianist Vince Guaraldi, with whom Granelli played for three busy years early in his career – including the landmark Peanuts television specials; and the eccentric singer/pianist Mose Allison, whose wry twists on the blues Granelli had the pleasure of accompanying for nearly 40 years.

Never one to dwell on the past, Granelli has long eschewed tribute projects or reprises of past glories. Two factors combined to change his mind on this remarkable occasion: the joy of delving into these extraordinary compositions with a modern urgency untouched by nostalgia; and his collaborators, both of whom share his expansive approach: pianist Jamie Saft and bassist Bradley Christopher Jones.

“We’ve all had experiences playing so many different things,” Granelli says. “We all love the blues, whether we play them all the time or not, and we all love great songs – and these are really great songs. I don't think material gets old; what gets old is when people try to recapture a stale version of the past. We were able to bring a really fresh feeling to this music, and that’s important to me. We didn't try to recreate anything.”

Granelli’s tenure with Vince Guaraldi dates back to the early 60s, when he was just 21. The young drummer had just returned to his native San Francisco following his first national tour, and discovered that Guaraldi had recently parted ways with his trio. The pianist had just scored a hit with his tune “Cast Your Fate to the Wind,” so a hectic schedule awaited.

“It’s hard to get that kind of training,” Granelli says. “We got paid to play six or seven nights a week, then go out after hours to places like Bop City in San Francisco to sit in at jam sessions till 6 in the morning. This record reflects those times.”

On top of a grueling performance schedule, the period included Guaraldi’s acclaimed recordings with the Brazilian guitarist Bola Sete and the Peanuts soundtracks that are still rerun every year over half a century later. Granelli’s exquisite, whispering brushwork graces A Charlie Brown Christmas, which has become a holiday tradition and introduced generations of children to the sound of jazz.

After leaving Guaraldi’s employ in 1965, Granelli refused to revisit his music for decades. There were new sounds to be explored – he’d soon join the renowned Denny Zeitlin Trio alongside bass legend Charlie Haden, and in later years would work with a pantheon of his peers: Pat Metheny, Bill Frisell, Lee Konitz, Kenny Garrett, Ralph Towner, Jay Clayton, Gary Peacock and countless others. In recent years, however, Granelli began touring a show called Tales of A Charlie Brown Christmas with his trio in Canada, where he’s lived in Nova Scotia since the 90s.

Pitfalls abound in bringing an avant-gardist’s perspective to such graceful music. “I didn't want to try to make it weird,” Granelli insists, “and I didn't want to imitate the originals. In all honesty I resisted it because I didn't have a way in. But now I can appreciate it being such a part of the culture. It’s amazing to me; it’s phenomenal.”

The immortal “Christmas Time Is Here” almost inevitably closes the album, imbued with a heartbreaking tenderness that feels utterly immediate. The lushness of the rendition may seem surprising given the experimental credentials of Saft and Jones, but it’s exactly that attentiveness to the moment – which they share with the drummer – that makes these renditions so stunning.

Granelli refers to the title of Nowness, his 2015 album with Saft, to explain the feeling of the trio. “You’re letting go of the past, you’re letting go of the present, and you’re just in the music. That’s the place you want to play from at all times. Then your whole vast experience is available to you and you can discover something new you’ve never played before. This record is a wonderful celebration of that coming together of now.”

The same applies to Guaraldi’s other contributions to the album, “Cast Your Fate to the Wind” and “Star Song.” Granelli recalls the latter piece as a favorite of Miles Davis, who would come to hear the Guaraldi trio night after night while they worked in Los Angeles.

Granelli joined Mose Allison’s trio in the mid-70s, in time to record the classic album Your Mind Is On Vacation. They would continue to work together intermittently until Allison’s death in 2016. “We were great friends,” Granelli says fondly. “Mose was like the Charles Ives of the blues. He would take the blues as far out as he could, and he became one of the great influences in American songwriting.”

The title track of Your Mind Is On Vacation comes in for a raucous dissection here, with a pair of drum/bass duo preludes interspersed throughout the album, each a stellar standalone piece on its own. The trio reimagines “Parchman Farm” through a Herbie Hancock soul-jazz lens, refracted into the raw power of the primal blues. Big Joe Williams’ “Baby Please Don’t Go” spotlights the burly muscularity of Jones’ bass, while the satirical sting of “Everybody’s Cryin’ Mercy” resonates even without a word being sung.

“Once music gets into my genetic system, I can remember exactly charts I played 50 years ago,” Granelli explains. “Mose’s words are incredible and I hear the lyrics, I hear the poetry, in my head as I play. That’s part of the jazz tradition: how do you play the same piece of music every night and make it fresh?”

That freshness is shot through every note on The Jerry Granelli Trio Plays Vince and Mose, whether it was written on sheet music decades earlier or invented on the spot as these three inventive musicians came together. It’s the spirit that drives Granelli as he approaches his 80th birthday at the end of the year, the same way that it drove him to help create much of this music earlier in his life, and to find new details and sparks within it night after night throughout a truly incredible career.

“One reason why people like improvised music is that it’s a direct reflection of life, not something we thought up. It scares you…makes you think you’re going to die for a moment…do you have the courage to play? Can I move out of my desires and wants, and into compositional choices?” – Jerry Granelli
Born in 1940, in San Francisco. ... more